I woke up this morning with the horrible news of the tragic death of one of the greatest sportsman in the world. Kobe Bryant, his daughter Gianna and other passengers. My condolences to his wife and families. I am in shock.

So sad to hear the heartbreaking news of the deaths of Kobe and his daughter Gianna. Kobe was a true legend and inspiration to so many. Sending my condolences to his family and friends and the families of all who lost their lives in the crash. RIP Legend


More than just an icon in Basketball - the world has lost a sporting superstar.

Thinking of the Bryant family & friends today after the tragic passing of Kobe, his daughter Gigi and their friends who were travelling with them. #RIP https://t.co/fU6tSF01iR

Heroes come and go
Legends are for ever ?
R.i.P. Kobe and his daughter Gianna and all the victims my prayers to the families #blackmambaforever https://t.co/JSoN1g9yea

Michael Jordan on death of Kobe Bryant: “Words can’t describe the pain I’m feeling. I loved Kobe — he was like a little brother to me.” pic.twitter.com/r8JNMjfuRR

You were a big influence to millions of people, including myself!

You changed sports history and your legacy will always be remembered.

Heroes come and go but LEGENDS are forever! pic.twitter.com/izeT4xFar1

I’m sad to hear that we lost one of our greats. @kobebryant was one of the greatest athletes and was such an inspiration to so many including myself. I’m deeply saddened for his family and for the people around the world who looked up to him. May he and his daughter rest in peace pic.twitter.com/O4ZWANcGKm

I just can't believe it. My condolences to his wife and love ones. Speechless. My prayers for the people who lost their lives in this unfortunate accident. pic.twitter.com/JWaS46QIwO

Kobe and I shared so many special conversations about life and basketball. We had so much in common off the court. I used to love talking to him about Lakers basketball, being fathers and husbands and how much we loved Italy. I will miss those conversations and him so much. pic.twitter.com/PIv7obzr2x

Rest in peace KOBE BRYANT and all the victims who have passed away in that tragic accident and give all my condolences to family and friends pic.twitter.com/5wecXPdmaS

Kobe was a legend on the court and just getting started in what would have been just as meaningful a second act. To lose Gianna is even more heartbreaking to us as parents. Michelle and I send love and prayers to Vanessa and the entire Bryant family on an unthinkable day.

There’s no words to express the pain I’m going through now with this tragic and sad moment of loosing my friend, my brother, my partner in winning championships, my dude and my homie. I love you brother and you will be missed. My condolences goes out to the Bryant family and the families of the other passengers on board. IM SICK RIGHT NOW !

Most people will remember Kobe as the magnificent athlete who inspired a whole generation of basketball players. But I will always remember him as a man who was much more than an athlete. pic.twitter.com/9EZuwk8wrV

Everyone at Manchester City is shocked and saddened to hear of the death of Kobe Bryant.

He was a true sporting icon and transcended the sport of basketball.

Our thoughts are with Kobe Bryant's friends, family and the entire Lakers organisation during this tragic time pic.twitter.com/Bg9cQN83ZG

Reports are that basketball great Kobe Bryant and three others have been killed in a helicopter crash in California. That is terrible news!

A name written in gold in sports history. Kobe Bryant, you'll always be remembered as one of the greatest ever. pic.twitter.com/SW67hqVfFq

We are shocked and saddened to learn of the tragic passing of Kobe Bryant.

The world of sport has lost a true legend. We send our heartfelt condolences to the friends and families of all the victims at this terribly sad time. pic.twitter.com/ZuNk5SClEe

Kobe just 10 days ago I had the pleasure of meeting you and felt what a great human being you were. I really thank you for some of the kind words you said when we spoke. I am so sad that you are gone. Rest in peace. #rip #kobe pic.twitter.com/viUHR5F2P2

Beyond devastated... my big brother... I can’t, I just can’t believe it

Another sad and irreparable loss in the world of sport. Another unprecedented tragedy. At Chapecoense, we deeply regret the death of @NBA legend and @Lakers star Kobe Bryant. We sympathize with family, friends and fans and wish them much strength. Our prayers are with you. #kobe

I’m heartbroken by this news, you were a true legend, and friend. Rest In Peace @kobebryant, my thoughts and prayers to his wife and kids. #legend #mamba #goat pic.twitter.com/1VKYdbrVEk

The club would like to express its deepest condolences to his family and friends, to the @Lakers and the @NBA family after the tragic passing of Kobe Bryant. RIP, legend. pic.twitter.com/McVe3XL2md

We have no words to express how shocked we are to hear of the tragic passing of one of the greatest sportsmen of all time and Rossonero fan, Kobe Bryant. All our thoughts are with the families of those affected by this tragic accident. You will forever be missed, Kobe ?? pic.twitter.com/FOd365chEL

More then just basketball man he has 4 daughters... life is crazy. Thoughts and prayers to his family.

Damn. RIP Mamba. May your memory be a blessing

This is not real right now

Please somebody out there denies the news about Kobe!!!! 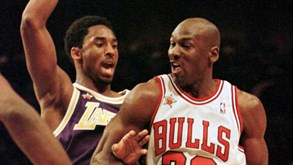